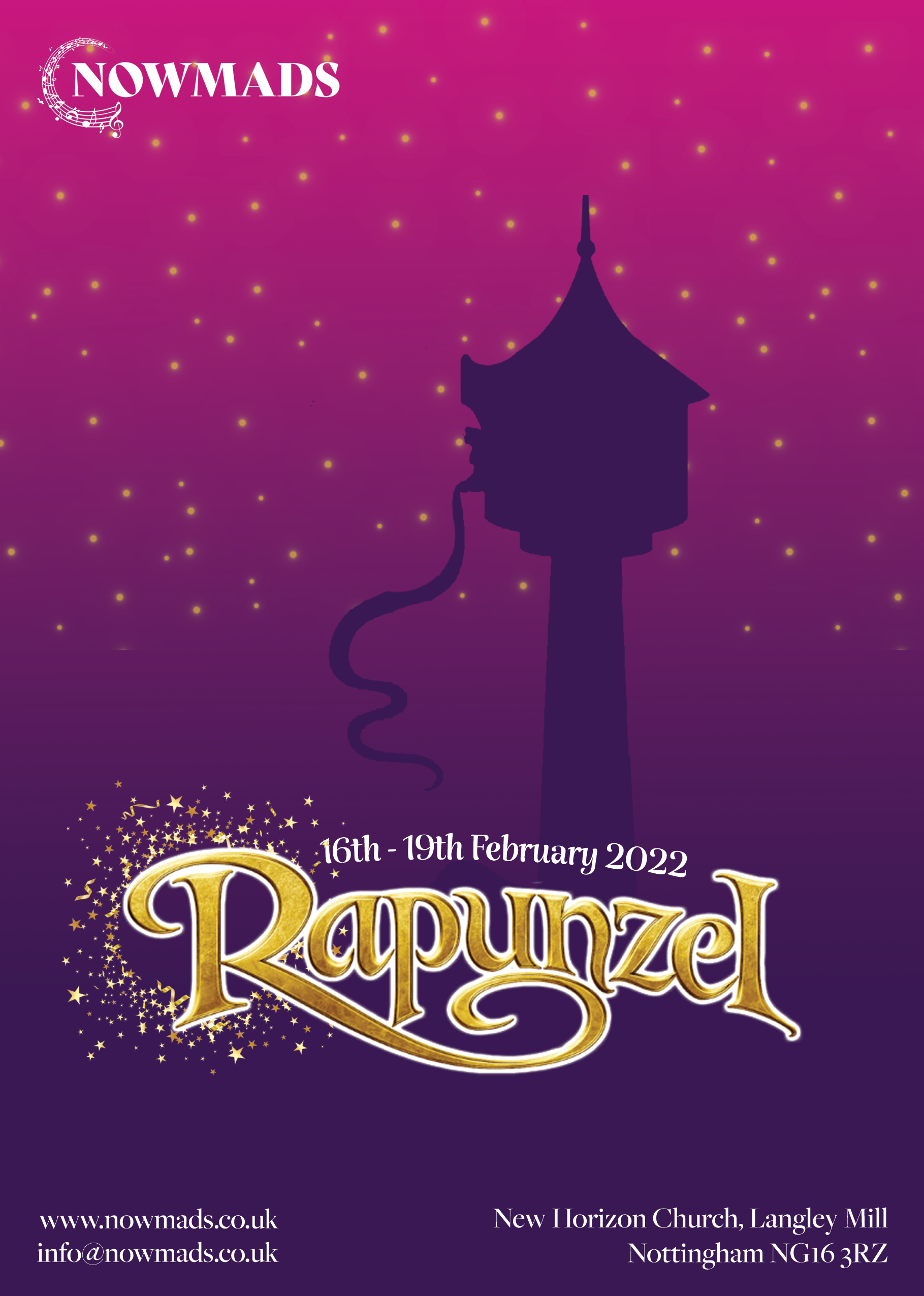 Penny Perm, the fabulous Dame and her side-kicks Hairy Mary and Brainless Bob are tasked with making arrangements for Rapunzels 18th birthday party.
Unfortunately, nobody has invited Fairy Dreadlock, who is deeply offended, and takes revenge on King Quiff and Queen Curly by capturing their beloved daughter, Rapunzel. Fairy Hair-do helps Flynn Perm and his glamorous horse Britney Spurs to save Rupunzel, but they needs your help too, so do join in….and don’t forget to boo Fairy Dreadlock! 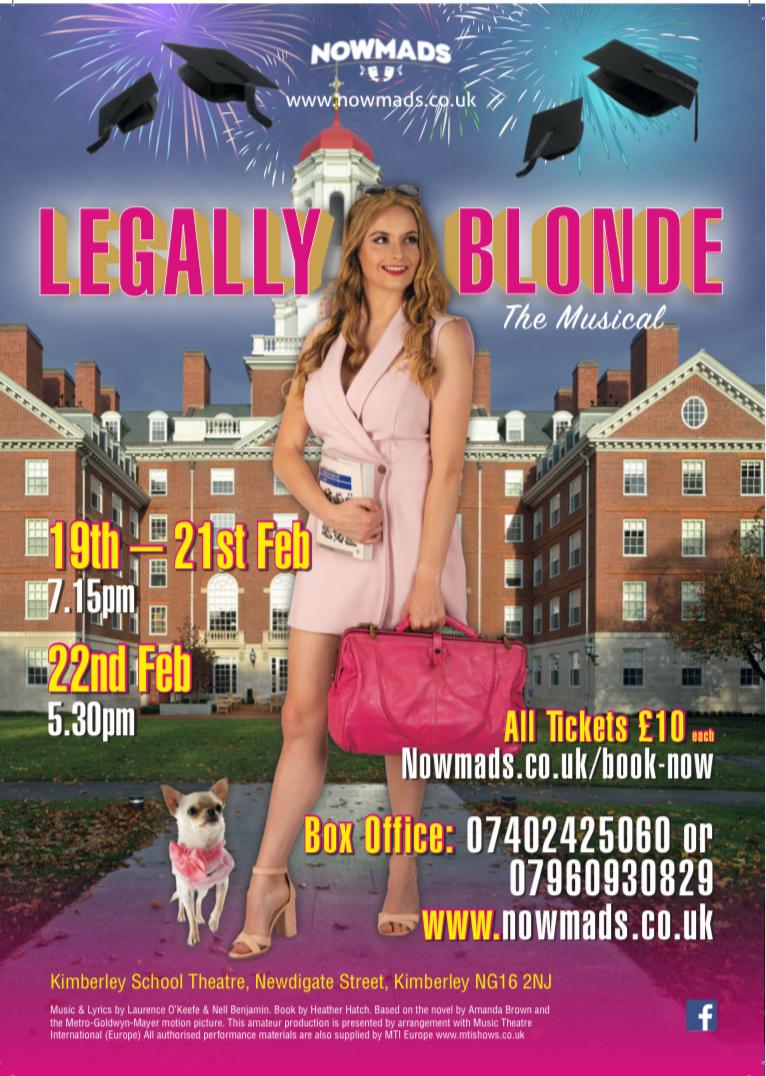 Elle Woods appears to have it all. Her life is turned upside down when her boyfriend Warner dumps her so he can attend Harvard Law. Determined to get him back, Elle ingeniously charms her way into the prestigious law school. While there, she struggles with peers, professors and her ex. With the support of some new friends, though, Elle quickly realises her potential and sets out to prove herself to the world.

It’s the first time I have seen a NOMADS Pantomime but from the quality of writing, performance and timing this is clearly a strength of the group. Pacing was always sharp and, which is unusual in my experience of community theatre, a live band supported all the key musical numbers with only a couple of exceptions for dance numbers. This certainly set the NOMADS pantomime apart from others that I see and was a very welcome addition.

Now – I’m not going to try tell the story of Treasure Island but safe to say all the key elements were in evidence from the Black Spot, through the WI Pirates, Long John Silver and his cut-throat cross dressing crew, to the industrial water rifles and baby shark…. As you can tell this was a classic pantomime with a nice modern comedic twist which at all times provided excellent settings, well-orchestrated set pieces and jokes that were funny without overly relying on double-entendre making this a very family friendly show.

The ensemble cast provided comedic strength in depth. Martin Belcher who I understand had stepped in with two weeks to go was a great Dame and engaged the audience without slowing the pace of the show. Emma Heydon was a very believable principal boy Jim Hawkins and managed, with Siobhan Waddington-Taylor as Jenny Trelawny to deliver a classic pantomime partnership.

Suzie Green and Lis Hipkiss were just right as the comic pirates and led the audience engagement throughout the night. Steve Clarke was obviously having way too much fun playing Long John Silver and this sense of fun was a key element shared by Ashley Smith, Danny De Martino and Rob Waddington-Taylor as the male pirate band. This crew started fast, establishing their characters and characteristics within their first scene and developed them throughout the night much to the audience’s amusement including the cross dressing as the team became the Pirate Cove WI. Evelyn Skellet was a very impressive Polly the Parrott and complete with fully body parrot costume and makeup added something unique to this production. As did Carole De Martino and the members of the WI who obviously revelled in their opportunity to be “bad” for once in a pantomime…
Throughout the night the team of dancers executed Jane & Merle’s choreography with great energy, accuracy and enthusiasm providing some great accents across the performance. The sets, set painting and costumes all added to the evening as did the lighting and sound balance which in such a confined space was no mean achievement.

I had a very enjoyable trip to Treasure Island. Many thanks and I look forward to seeing you again soon. 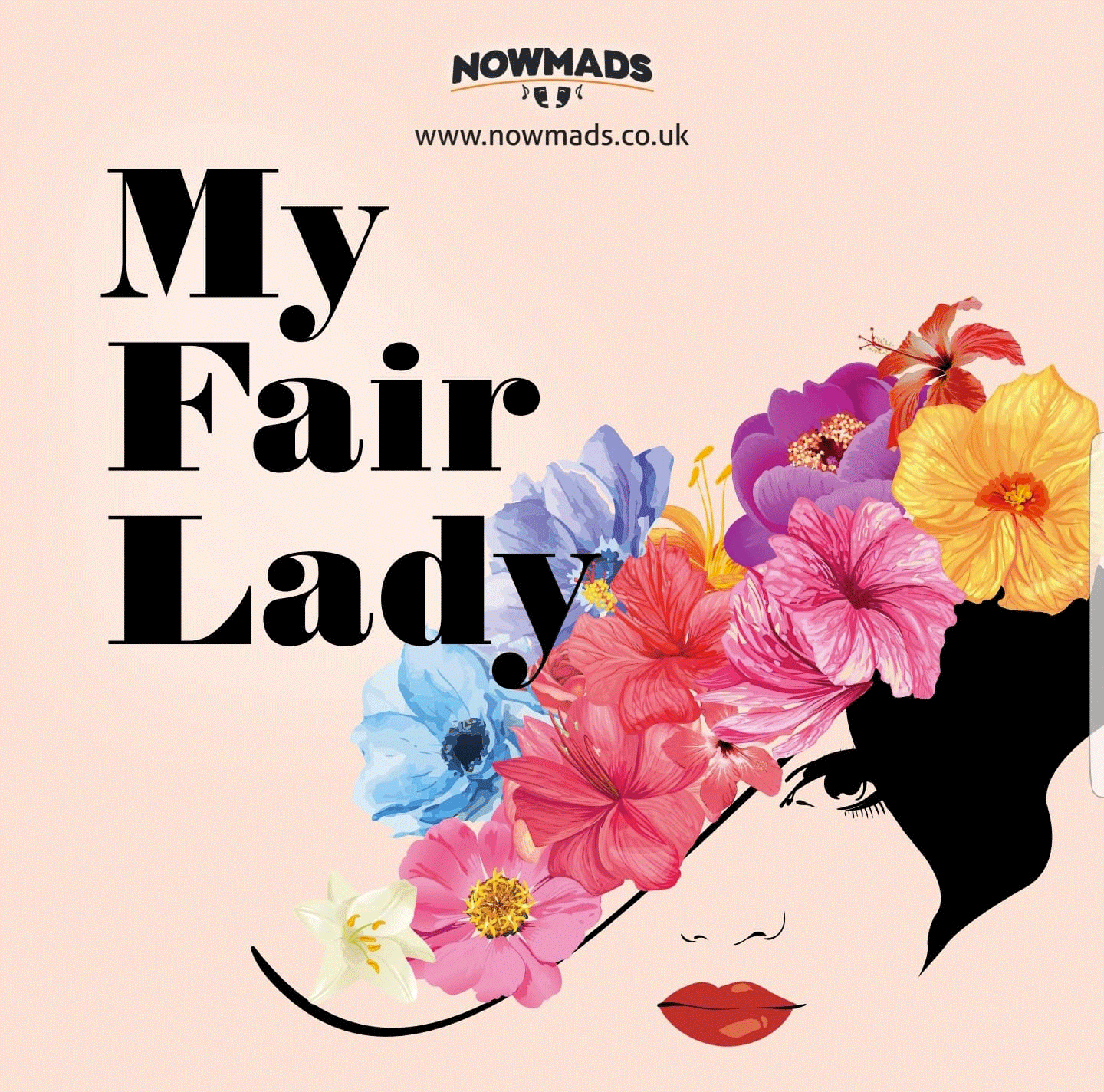 “What has been called “The Perfect Musical,” My Fair lady has just finished at The Kimberley School Theatre. Well done to the Nowmads group for an excellenct production of the show.

There is a large and strong cast and Graham Lambert’s fresh and lively production perfectly fits the not over large stage.

The ensemble numbers are excellent and I am particularly impressed by the way in which the cast are brought on and off the stage with great precision in the big production numbers such as “I’m Getting Married in the morning” which was first class. This makes the most of the stage and keeps the show moving quickly.

The standard of singing and dancing is high and the costumes are fantastic throughout. The lighting is also good and the use of the curtain scenes is very effective and allowed for very quick scene changes. The stage crew are very efficient and given this was the first night never put a foot wrong.

The sound is particularly good and I could hear every word that was sung and the excellent orchestra conducted by the MD John Wilson supports the performers well throughout.” 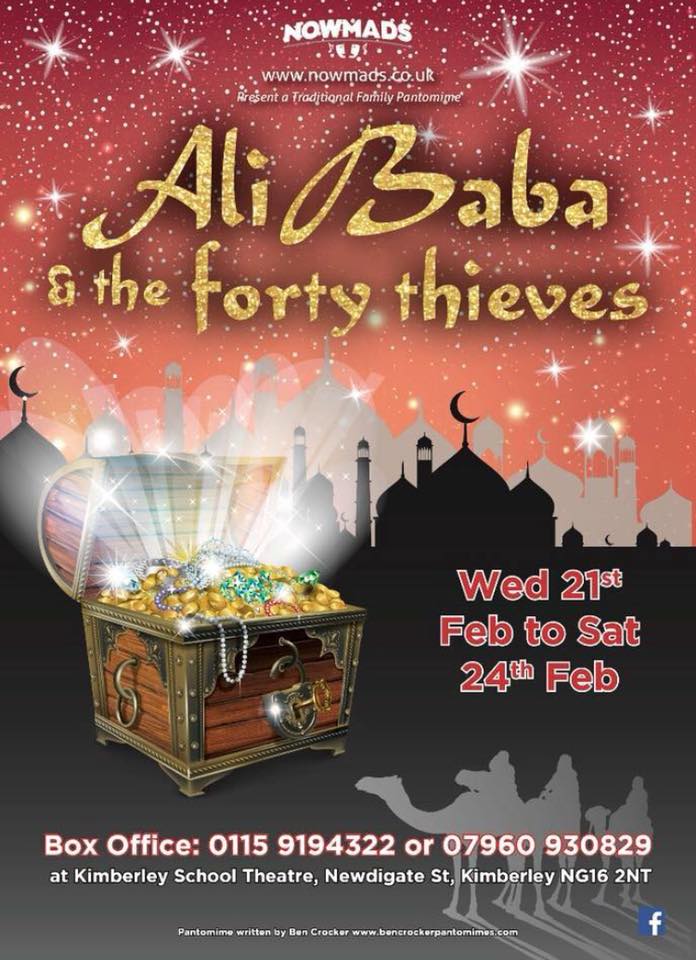 Ali Baba welcomes you to the City of Baghdad- where anything is possible. And in this Pantomime, that couldn’t be more true! Ali Baba, a penniless woodcutter, is on a mission to buy the freedom of his fiancé Safiya and her sister Huma, who are kept as slaves by Ali’s brother Cassim and his greedy wife Sharon. When Ali stumbles across a cave full of riches in the forest he can’t believe his luck, but with evil Chief Sheikh Mustafa Leikh around things don’t stay bright and cheery for long! But fear not, as Ali’s mum Babs and her Camel Kamil are sure to keep you laughing, and the storyteller and her friends will keep you entertained with plenty of singing and dancing throughout the show. 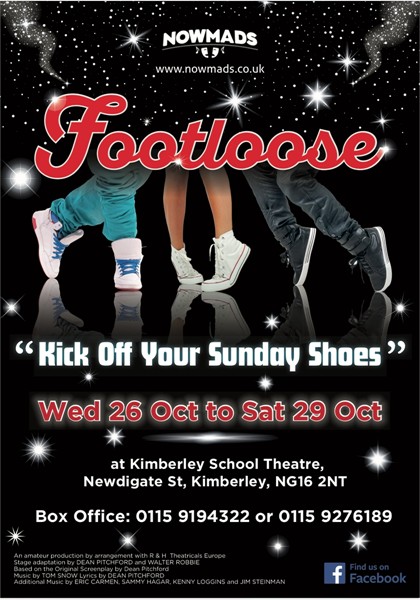 So we managed to kick off our Sunday shoes and get a little Footloose. Another sell out performance which saw NOWMADS try something a little different and bring this high energy and fast paced story of rebellion, love and anguish to the Kimberley School Theatre.

The show was hit with our audiences who left the performances singing the popular songs from the show including “Footloose”, “Holding out for a hero” and “Let’s hear it for the boy”.

If you unfortunately missed the show then look out for NOWMADS next production and reserve your tickets early. 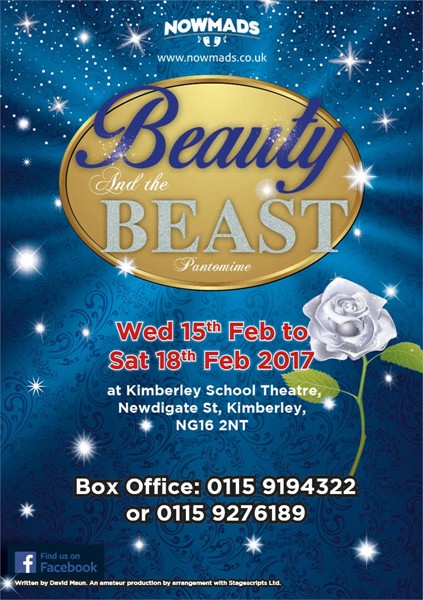 Beauty and The Beast

Beauty and The Beast was another sell out performance for NOWMADS and we thoroughly enjoyed playing to packed audiences – filled in particular with many Belle lookalikes. Featuring music form the Phantom of The Opera, The Rocky Horror Show, and Priscilla Queen of The Desert, this panto really showed off the singing and dancing abilities of the group – all the while providing plenty of laughs for the audience. With the release of the new Beauty and The Beast film, we are all singing along with fond memories particularly of “Be Our Guest” which was a real crowd pleaser. We secretly think we did it better!